Colours of Art
from the Collection of Svetlik Art Foundation

Panstwowa Galeria Sztuki / National Gallery of Art
Dear Friends of the Fine Arts,
Along with my friends Andrzej Nowacki and Zdeněk Sklenář, I invited a relatively large group of collectors from Poland, Germany, Switzerland, Hungary, and Austria to attend the opening of the KONKRET exhibition at the Milan Dobeš Museum in Bratislava. The guests participated in many lively discussions in various groups and covering a range of topics. After several hours, as people started departing, everyone felt assured that Czech, Slovak, Polish, and Hungarian Concrete Art simply is a part of European and world art, and we need not worry about the lack of international names. We also have such names, but do not know how to present them very well.
This led to the inception of the idea to present works of 20th century Czech art from the Svetlik Art Foundation’s collections at the gallery in SOPOT. The idea continued to develop for several months but, after my visit of Sopot, the concept for the exhibition changed. The endeavour to promote Czech art in Poland remained – but it was expanded to include a plan to exhibit a collection of Polish art as seen through Czech eyes. At the same time, the idea was put through to dedicate one part of the exhibition to the best of Czech architecture originating after 2010. The exhibition thus also includes an exhibit presenting the ongoing project for the revitalisation and new use of the Lower Vítkovice industrial area, which is very popular not only in the Czech Republic but also in Poland.
Additionally, 20th century Czech art, as viewed by the majority owner of the Vítkovice company, undoubtedly includes the works of painters representing the nationalities that made up the Austro-Hungarian Empire. For this reason, I designed the exhibition to include artworks from the collections of my long-ago predecessor in Vítkovice – its director, Oskar Federer – as well as works by Oskar Kokoschka, which the painter left behind in the Czech lands during his frequent visits.
The scope of the exhibition is determined by the available space; however, I have tried to highlight what I consider to be the crucial periods and artists of the 20th century in the Czech lands.
During your visit to the exhibition, you might choose to settle down in the section devoted to Cubism and Surrealism. An exhibit of Novotný’s cubist furniture is included – you can sink into one of his armchairs and leaf through books about Czech artists. And from this comfortable position in a cubist armchair, you can contemplate and think about how much Polish, Czech, Hungarian, and Slovak art have in common.
Jan Světlík
Chairman of the Administrative Board
SVETLIK ART FOUNDATION 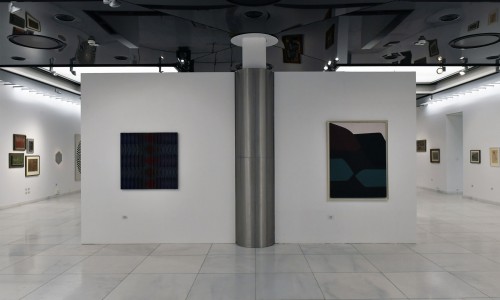