Galerie Zdeněk Sklenář – Schönkirchovský palác
In conjunction with the exhibition, Galerie Zdeněk Sklenář is also publishing a book from the Czech Laozi Edition – Laozi’s Dao De Jing: The Book of the Dao and Its Virtue, as translated by Rudolf Dvořák in 1920 and with illustrations by Krištof Kintera.

"Cities speed up time, condense space, compress opportunities, accumulate experiences thus offering excitement as well as education, and generate both progress and the huge consumption of absolutely everything. That’s why people want to go to cities. To the tangled webs of cables and networks. To places where there is gas, internet, and water. We need to drink, read, google, educate ourselves, and mate. We are one huge giga-superorganism in the new Urbanocene era.

We live in an exponentially accelerated world. There’s no doubt about that. The gradual discovery and subsequent taming of the energy sources our planet’s physical environment offers has led to unstoppable progress. However, growth has now become unsustainable rather than permanently sustainable. The instant and addictively efficient use of fossil fuels, combined with the ability of science, and subsequently industry, to force the electrons in conductors to move in the desired direction, all in enormous flows and volumes, have radically changed the way we live. Both the world and our lifestyles have become drastically different over an incredibly short period of time. The landscape, architecture, and art have all changed and even the way we think is changing.

This growth may be seen in, among other things, the ever-taller glass and iron buildings, the rapidly increasing size and number of cities, and the way in which these cities are then linked to form gigantic agglomerations and megapolises. Every three months an urban configuration with an area equal to New York City appears somewhere in the world. The majority of the world’s population is abandoning the countryside and giving preference to city life. In Europe, this number has even reached 73%.  The landscape in which we live is a complexly structured gigantic network of feeder pipes, conduits, collectors, cables, gas pipelines, water mains, sewers, drainage, oil pipelines, industrial food growing facilities, roads, hubs, solar panels, data centres and call centres asking about customer satisfaction with the delivery and quality of necessary services. All of this may be found not only in a highly visible form, but also covertly, in multiple layers, underground, and in the walls of buildings. Let’s not forget that a similar level of extreme complexity also exists in an invisible form in the guise of communication signals, 5G and 4G frequencies, the ubiquitous Wi-Fi, and radio and television waves. Our desire and willingness to network even more thoroughly has taken us into nearby outer space, where we are currently beginning to encircle the planet with 12,000 Starlink satellites that will soon cover the entire globe with satellite internet. It is also unstoppable and not sustainable progress that influences the shape and aesthetics of today's observable world. The exponential growth curve looks a bit ominous – during its most recent phase it has gone vertical.

I’ve turned my focus to the landscape, and, with a bit of exaggeration, I say that I am currently devoting myself to “landscape painting” and “reliefs”, both of which sound so appealingly anachronic that it’s possible to mischievously confuse just about anyone. Why? Because both landscape painting and reliefs are formally somewhat passé. I am fascinated by changes and substitution of scale, when something very small, sophisticated and carefully contrived is reminiscent of something big, which is also highly developed, promoted by architects and developers, and constructed by builders. An electric coil looks like a granary, a capacitor resembles a gas holder and a fluorescent tube a skyscraper, while memory slots represent suburban housing. Micro is interwoven with macro; that which is above is also below, what is small is also big, and the small is in big and the big in small.  And in the middle of it all there are myriads of ants rushing about, or we people, with an entire range of personal desires, opinions, feelings and problems. But I do not intend to launch into psychology, and am focusing only on confronting measuring scales and formal similarities. On carefully established links between the individual elements. I create an image that doesn’t provide light, doesn’t pulsate, doesn’t emit smoke or generate heat. The sculpture condenses its energy without any ambitions of being practically functional in any way. I am interested in the vertical lines of growth and the curves of the subsequent breakdown, when something new and shiny grows atop something old and time-worn, but will sooner or later oxidise and become rusty and will itself be temporarily replaced by something new and seemingly indestructible." 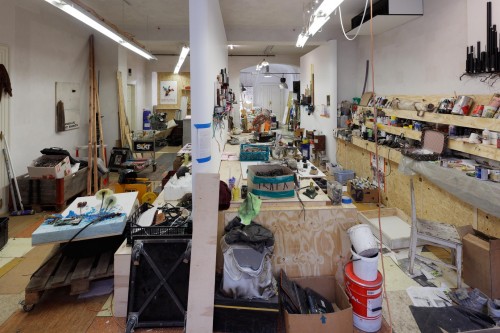 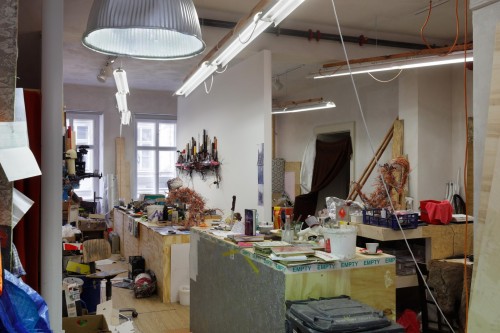 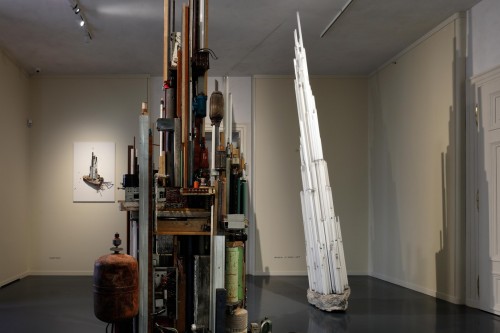 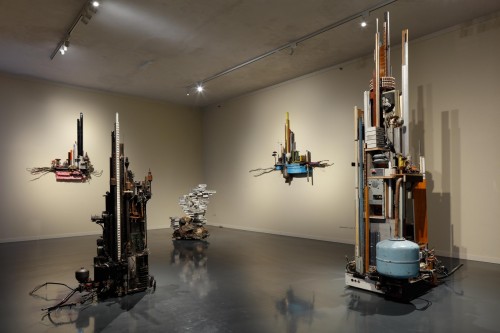